Waking up at 5:30 am has never been my thing. I do it anyway. I need to be at the cafe by 6:00 to be sure the dining room is set-up for our 6:30 am breakfast opening. This is why they pay me the big bucks, (joking here) because none of the other wait staff would even consider coming in before 7:00.

I find this fascinating because when I used to work for my friend’s St Louis party bus company, I would often find myself working strange hours just to make sure the vehicles were ready for clients the next day. This meant going above and beyond working normal hours, but I have to say I’ve always been fine doing that. Anyways, back to work at the restaurant!

The cleaning service came in during the night and did their twice monthly deep sweep. The windows are free of fingerprints and smudges. The dust is gone from the shelves and the floor has a brand new sparkle. The coffee is brewed, and the pastries look too good to pass up, the chairs are down and the tables and counter wiped clean. Salt and peppers and other condiments are full, coffee is brewed (Did I say that already?) and I turn over the closed sign to say OPEN at precisely 6:30.

That’s the beginning of life at the cafe for me five days a week. Not very glamorous, I admit. It often crosses my mind to ask why do I stick around? The money’s not bad, and the people are great but . . .There are a few other perks that come along with helping a good friend keep his dream alive through a small neighborhood cafe. Waiting tables gives me time to go on auditions.

Auditions come up somewhat randomly and getting time off is pretty easy. Someone is usually willing to cover for me, even if I’m gone half the day. The other perk at work is that I have a theater of characters that come and go all day who unknowingly lend themselves to my study. Lily Tomlin is one of my inspirations, and she helped me see the character in everyone. We humans are such an interesting lot. 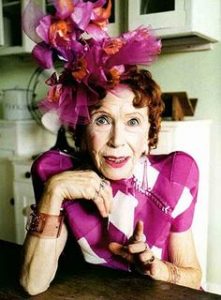 Let me tell you about Agnes. Agnes loves to wear big hats. People tell me she’s been wearing big hats for decades. Her style is unique and she has a very feminine demeanor. A strong, mature, educated woman, she is a talker. Here’s the thing, she is not a loud talker, so she draws people closer, in their effort to hear her. What’s apparent is she’s got a very kind way about her. People who know her are automatically welcomed by the site of her hat. She may come into the cafe alone, but seldom eats alone.

I recently auditioned for a part that called for an English countrywoman. I immediately started to think of Agnes. It’s as though Agnes stepped out of another time when things were less static and more demure. Although the part called for an older woman when I read for it, I became Agnes. How would Agnes say a line? How does Agnes hold her tea? It was a supporting role in an off off Broadway play, but I was given the part and loved every minute of being on stage. I was introduced to the art of wearing big hats myself. My character, the Lady Iris, was a 19th century gentlewoman of means who had an array to choose from.

Agnes is not perhaps our typical customer at the cafe, but then again, I’m finding there is not a single person who I serve on a regular basis who I find typical. I’ve been sifting out mannerisms, and expressions, hand gestures and accents from all my unsuspecting cast of cafe characters. Nearly every audition I go to, a personality from the cafe ends up playing a part.

So waking up at 5:30 five days a week, I’m reminded of the end game. The one where I’m standing on-stage accepting my Tony Award for some grand part I played, and thanking all my customers, by name.

I soon snap out of my reverie when I hear Billy yell “order up”.